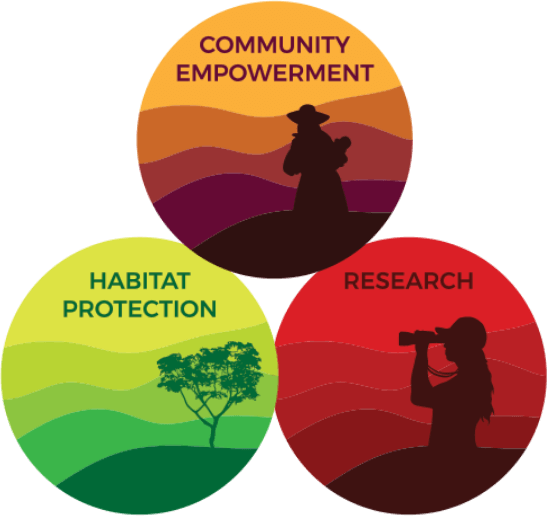 Our Approach to Protecting Spectacled Bears and their Habitat

Our integrated approach to protecting spectacled bears and their habitat focuses on the interaction of wildlife, community and land.   We have developed a conservation model based on community empowerment, habitat protection and research to maximize our conservation impact and tackle key challenges facing spectacled bears.  Focusing on bears (a keystone and umbrella species), is also strategically protecting other wildlife and local ecosystems.

We use scientific research to learn about the bears and to identify priority habitat areas; understanding their biological needs and the threats to their survival, equips us to better protect bears.

We simultaneously partner with local communities who own land with prime bear habitat and commit their land to private protected areas. We work to empower them through conservation education (our Forest Guardians program) and alternative livelihoods (our Felti program) to reduce human-bear conflict and pressure on bear habitat. Through these community partnerships and collaboration with private landowners, governments, and conservation organizations, we are creating protected areas to secure pristine spectacled bear habitat.

Wildlife and people must co-exist, but sometimes their collective needs don’t align.   Given the rapid increase in human use and development in the equatorial dry forest, montane forest and paramo, the likelihood of conflict is increasing.

Spectacled bears and mountain tapir are large mammals that require large areas to roam and forage for food.  Habitat loss and fragmentation from agriculture, cattle grazing, development and wildfires results in isolated populations facing serious risk of decline due to a lack of food. In addition, when individuals are unable to travel and breed with different populations, this lack of genetic diversity can make existing populations more susceptible to disease and low reproductive success.  We are seeing this threat play out in our equatorial dry forest bear population at an alarming rate.

Many communal lands are also not legally registered, which makes them vulnerable to resource extraction like mining and logging, which greatly compromises habitat.

Spectacled bears are the least studied bear species globally, and most of the knowledge we do have is from bears in captivity.  We do know that in the next few decades their extinction risk is predicted to increase faster than any other bear species. The lack of knowledge about spectacled bears in the wild limits our ability to develop effective management plans because we don’t fully understand what their ecological needs are in the wild. This is why scientific research is vitally important to spectacled bear conservation.

Education, training and economic opportunities change behavior and perceptions about conservation, which reduces pressure on the local environment.  For conservation to be effective, local communities must have a direct role in, and benefit from, conservation decisions.  Our Forest Guardians program provides conservation education and implements local initiatives resulting in positive impacts and behavior changes in the community. Our Felti Program incentivizes conservation and protecting community land by providing an alternative livelihood and income for local women that is unrelated to natural resource use.

SBC’s conservation decisions are based in scientific research. We continually monitor known bear populations and expand our study area to find new ones.  Analyzing bear demographics, seasonal habitat use and the critical resources bears need for survival helps us identify priority habitat areas.  We also share our data with the scientific community and collaborate with conservation organizations, academic institutions and governments to ensure we maximize our conservation impact for both spectacled bears and other wildlife.